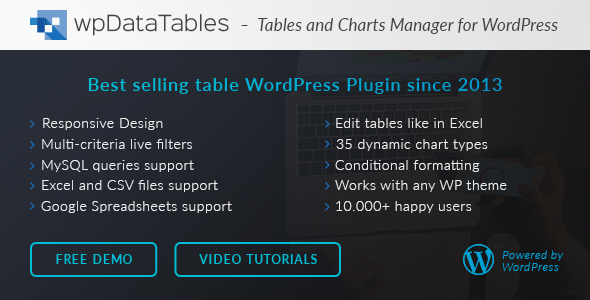 wpDataTables is a powerful responsive Tables, Spreadsheets and Charts Data Manager in a form of a WordPress Plugin. If you want to join the testers team just open a support ticket here and we will add you to the list. You will always get the newest features first. Please note that you must be among existing users of wpDataTables.

Some Articles about wpDataTables plugin

For the people who want to request support: please make sure that you check the FAQ, documentation first. If your question isn’t there feel free to contact our support manager through the support system. We receive a lot of requests nowadays, so we ask you for understanding in case of delayed replies.

MANUAL UPGRADE PROCEDURE (when a new version is released)

A regular update including some stability improvements and bugfixes.

A minor stability update including some patches for auto-update feature.

A significant update with a couple of new features, stability improvements, and other.

A significant update with a couple of new features, stability improvements, and other.

A minor release with a couple of patches for 2.0:

A major release with a ‘revamp’ of back-end and front-end:

See more detailed overview of wpDataTables 2.0 in our blogpost

A minor update, introducing 2 new features and a number of minor fixes and improvements:

A large update, a lot of new functions. Was supposed to be a stability update, but grown to a large release. Click here to see a brief video overview of the new features. Among others:

A major update. A lot of different changes and improvements. Basically the biggest change to wpDataTables since launch. Check this document for more info on new functions.

Just another patch on a long way to Table Constructor module. No new features, just bugfixes.

Security patch. A couple of minor bugfixes also included. New in this version:

For more info on what’s new and complete changelog you can see this page.

Update procedure: Disable plugin, overwrite with files from the new package, enable plugin again. This is necessary since the database structure has to be updated on reactivation.

wpDataTables 1.6 is a mighty data manager in a form of a WordPress plugin. It helps you to create dynamic responsive tables, charts in your WordPress site edit and allow your front-end users to edit data in them. See the video features overview or the text features overview if you’re interested.

There’s a video course of around 40 short tutorials filmed on wpDataTable. Check it out on our site!

Check out the documentation and live examples before you purchase on our demo site.