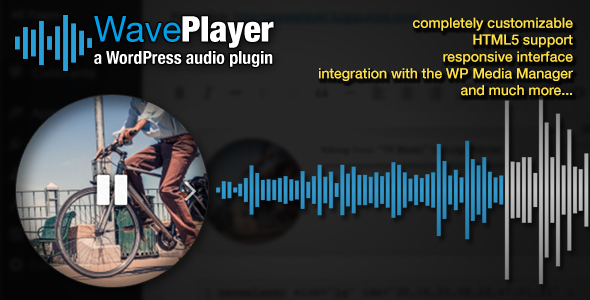 WavePlayer is a fully customizable, responsive HTML5 audio plugin for WordPress. Its interface is built around the waveform of the audio file that is playing back.

With WavePlayer you are free to host your own tracks, breaking the limitations imposed by most of the free music cloud services available on the market, but without renouncing to a cool, modern player that you can customize to best match the look of your website. WavePlayer has been accurately rewritten to make it faster, more efficient and to incorporate all the features requested by customers during the past year.

PLAYLIST PANEL – WavePlayer finally features a visible list of all the tracks included in a single instance. The site administrator can easily configure the info and buttons shown on each row of the list.

PEAK FILES – Audio tracks get analyzed as soon as they are uploaded to the Media Library. This way you do not have to wait for the waveform to be rendered when using a track for the first time, which is particularly useful for extremely large files. Moreover, a fully renovated Maintenance section allows you to Manage peak files more easily.

FASTER AND MORE EFFICIENT – All player instances in a single page are loaded simultaneously, reducing enormously the loading time and making the interaction with the server much faster and more efficient. For example, if you have 10 instances on a page, the older versions of WavePlayer sent 10 calls to the server, getting the playlist of each instance at a time. WavePlayer 2.1 analyzes the current page and send to the server a single request for all the instances on the page. This makes the interaction with the server more efficient and reduces the loading time enormously. Starting from verion 2.1, only one Audio Element per page is created, making the loading times even faster and the memory management more efficient.

CUSTOMIZATION – WavePlayer is very appreciated by its customers for its incredible customization capabilities. With the new version 2, the possibilities go even further. With the introduction of the new playlist panel, you can now customize the information shown on both the Info Bar and the playlist rows. The number of placeholders you can now use to customize the info shown has expanded. The webmaster can now customize both the Info Bar and the playlist adding buttons and stats for the most common utilities, including likes, social shares, download, play counts and runtime. The system is easy and flexible, allowing you to customize what to show.

WOOCOMMERCE INTEGRATION – Integration with WooCommerce has been extended to support all types of products. The integration aims to automate as much as possible the creation process for music products, such as music singles or music albums. The new features include: the creation of a product meta value that stores the music type of the product (single or album); the creation of a product meta value that stores the location of the preview files for a single or an album; the automatic insertion of the player, based on the preview files, in both the Shop and Product pages; the optional replacement of the product image with the featured image connected to the preview file; a double batch process that automates the creation of products for singles and albums.