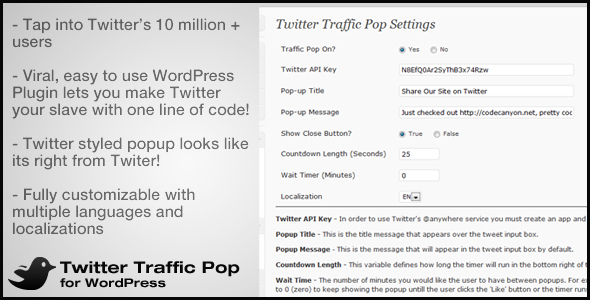 Instead of forcing your visitors to see popups with ads, why not ask them to Tweet instead! Tap into Twitter’s 100 million plus users with this hot new popup style marketing tactic. Make Twitter your slave with one line of code! More tweets = more exposure = more traffic = more money!

Includes full source with documentation and well commented WordPress Plugin and jQuery plugin version of the pop up script.

Note: Twitter Traffic Pop uses the @Anywhere API so you will need to register for an API key before using the script.

I have noticed that a lot of people are running into issues bc of botch installs or simple mistakes. If you would like to have the script installed by me, send me a message. Only $10 via PayPal.